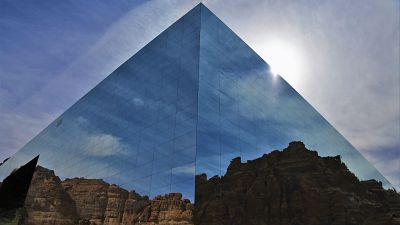 The Maraya concert hall is a real feat of engineering. It is the largest mirrored building in the world, but it blends seamlessly into the desert around it. It is almost impossible to see where the sandstone cliffs end and the concert hall building begins.

The construction of this building is only one small part of the changes under way in AlUla – a region of Saudi Arabia that is beginning to attract foreign tourists. With an ambitious sustainable regeneration project, AlUla has its sights set on becoming a unique destination for arts, culture, heritage and nature lovers from around the world.

If you're planning a trip, here's everything you need to know about this magical area.

In the northwest of Saudi Arabia, and 200km from the Red Sea, AlUla is located on the old ‘Incense Road’. This was a trade route that linked Arabia with the Mediterranean region. For centuries it was a geographical and cultural crossroads, a place of meetings and exchange. It attracted travellers from all over the world, and since 2020 has been doing so again. An ambitious regeneration plan aims to attract two million visitors by 2035 and make this the world's largest living museum – a unique and global destination for arts, culture, heritage and nature tourism.

Where is the ‘other Petra’?

This vast desert area, around half the size of Denmark, is cut through with a lush valley, and dotted with towering sandstone outcrops and monuments dating back thousands of years.

The best-known monuments are in the ancient city of Hegra, sometimes referred to as the ‘other Petra.’ This is because Petra was the capital of the Nabataean kingdom, and Hegra was in the south of this kingdom. Famous for its beautifully preserved tombs carved from the rock formations, Hegra was Saudi Arabia’s first UNESCO World Heritage Site.

Other highlights of AlUla are the labyrinthine streets of the otherworldly Old Town, the tombs at Dadan, the extraordinary petroglyphs at the ‘open library’ of Jabal Ikmah and the curious Hijaz railway station.

Five distinct districts within one region

The ‘Wadi of Hospitality’ is a seasonal river valley that has been fashioned into a 20km green walking trail, linking five districts.

Each district shows a different element of AlUla’s 200,000 year history. You can have a different experience in each district, from museums and gardens to galleries and hiking trails, along with food and accommodation options. A total of 5,000 rooms, across eco-lodges, luxury hotels, resorts and ‘canyon farms’ carved into the sandstone rocks, will be almost doubled by 2035.

AlUla Old Town – a maze of buildings in a leafy oasis

The first district is AlUla Old Town, at the very heart of this ancient cultural oasis. A maze of close-knit streets and mud-brick shops and homes, this historically significant town was inhabited from the 12th century to the 1980s and is being sensitively restored.

It is set in an oasis that is testament to ancient techniques of water management, irrigation and land use. It is a lush and fertile area that stands in dramatic contrast to the land around it.

The second is the Dadan district. During the first millennium BCE, Dadan, was the capital city of the Dadanite and Lihyanite kingdoms. Watched over by towering red rocks, this continues to be an active archaeological site, gradually revealing its ancient stories to visitors.

Dadan is also home to the Kingdoms Institute, a centre for archaeological studies and a cultural platform fostering knowledge and encouraging exploration. Programmes will include the preservation and understanding of rock art and inscriptions, and research into prehistoric and historic agriculture and sustainability.

Jabal Ikmah, known as AlUla’s ‘open-air library’, is the third district, and comprises a breathtaking collection of rock inscriptions. These petroglyphs are thought to date back as far as the first millennium BCE and include drawings of animals, people and musical instruments as well as messages, offerings and even laws inscribed in ancient languages. Here visitors will also find the Incense Museum, a must-visit for learning more about the trade route’s most precious commodities.

Nabataean Horizon – home to a village carved into rock

The fourth district is known as the ‘Nabataean Horizon’, a striking vista of magnificent rock formations, a prelude to those in Hegra. An immersive journey through the lifestyle of these nomadic people, this district includes a village carved from the rock, and a Nabataean-style open-air theatre. It is also home to the stunning Maraya concert hall, the largest mirrored building in the world.

Hegra – at the crossroads of the Silk and Incense Routes

The culmination of this itinerary is the historic city of Hegra, the fifth district. Hegra, or the ‘Silent City’, prospered thanks to its position at the crossroads of the Silk and Incense Routes. Its monumental tombs carved into sandstone facades are proof of the wealth, prestige and international connections of its former inhabitants. Defensive structures, including a fort, reveal the city’s strategic importance even after the Roman annexation of the Nabataean Kingdom in 106 CE.

The complex contains more than 110 tombs and major archaeological sites, as well as the restored Hijaz railway station.

Sustainability has been at the heart of the restoration of AlUla

Sustainability and a commitment to the circular economy are at the heart of the AlUla project. The Wadi of Hospitality, running through the ancient oasis, is the focus of rewilding and biodiversity plans. A 46km low-carbon tram line will connect AlUla International Airport to the five districts. This scenic roadway, like the wadi, will mostly follow the route used centuries ago by pilgrims on the Hijaz railway.

At the moment, 60 per cent of the oasis has been abandoned due to the lack of water and years of unsustainable farming practices. But a strategy to rehabilitate the land and reverse the course of desertification with improved water management is under way, under the umbrella of the Saudi Green Initiative. Eighty per cent of the region’s land has been earmarked as nature reserves and many species of flora and fauna have been reintroduced.

As well as agricultural and water management programmes, community-driven services and amenities have been very important in the planning of AlUla’s transformation. By 2035 it is hoped that 38,000 new jobs will be created, and that the regional population will grow to 130,000, contributing US$32 billion to the country’s GDP.

Reflecting Saudi Arabia’s dedication to the preservation and protection of world heritage, knowledge and research, AlUla also represents the country’s commitment to a progressive future, opening its borders to international tourism and developing new spaces in which local people can live, work and explore.

A definitive guide to the biggest eyesores in Europe

Holiday homes from hell: Is it worth buying property abroad?

Here are the latest COVID-19 travel restrictions in Europe

Red, amber or green? UK fleshes out its traffic light rules for travel