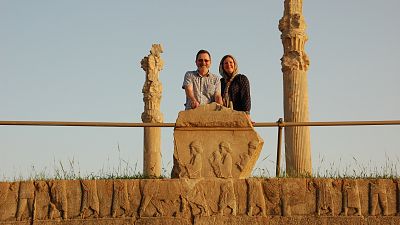 South-African born Lisa Jackson is a travel writer who has visited almost 100 countries and completed over 100 marathons (and proudly come last in 25). In this extract from her most recent book, she details an unnerving experience with the secret police in Tehran.

“You’ll probably get one, but when they know where you work they’ll think you’re a spy,” said a colleague, when my civil servant husband Graham enquired about his chances of getting an Iranian visa.

Sure enough, six days after we’d landed in Tehran, we had our first encounter with the secret police.

“They want me to join them in the room opposite ours,” said Graham when I brought him a mug of tea in our Shiraz guest-house central courtyard.

My heart pounding, I retired to our room. I couldn’t hear sounds of torture, only occasional laughter, so reckoned Graham was okay. An hour later I started to worry. ‘If we’re detained, I’d better let someone know where we are,’ I thought, texting the friend least likely to panic.

It was gone 11pm when Graham returned. He’d been gone two hours.

Convinced they’d bugged our room, I understood his cryptic comment to mean ‘I don’t want to discuss what just transpired.’

“Mr Mahdavi was very polite,” said Graham over breakfast. “I was served melon balls and asked my views on Brexit and the war in Yemen. Oh, and he asked if I’d grown my beard specially for this trip. As if I’d try to pass myself off as an ayatollah!”

We fell about laughing. Graham loves any excuse not to shave and I’d given him permission not to, provided he lost the fuzz when we returned to London.

Five days later, in Isfahan, there was a midnight knock. Graham opened the door and a pungent fragrance barged into the room.

“Er… Really? If you must,” answered Graham.

Struggling to manoeuvre a huge floral arrangement with a nauseatingly smelly lily at its centre through the narrow doorway, the stranger entered. He was six foot five, rake thin and wearing a pink shirt and baby-blue suit. His over-sized Austin Powers spectacles, and the way he tilted his head, made me think of a praying mantis.

“Good evening, good mother,” he said, handing me the flowers. “These are for you.”

“Thanks. That’s… very kind,” I said, drawing the bedsheets to my chin, conscious that I was bare headed and half naked.

Turning to Graham, he invited us to join Mr Mahdavi for dinner the following evening. I clocked who he was: the secret police interpreter. Graham declined.

“It’s Mr Mahdavi’s way of thanking you for sharing your highly scientific mind.”

“The beautiful flowers are all the thanks we need. I can’t accept official invitations while on holiday.”

“It’s not an official invitation. The thing is, at the airport you could be asked lots of tedious questions. But if you come to dinner, this definitely won’t happen.”

“I’m not threatening you. I’m your friend.”

“So, the answer is yes?” said the interpreter hopefully.

Addressing me, the interpreter desperately implored, “What do you think, good mother?”

By now I was shivering, as much from fear as from the cold. It was 1am and I was feeling ground down by the wrangling. I was about to accept when I glanced at Graham who frowned a stern ‘No’.

“I’d have loved to,” I said, before uttering words I never thought I’d say, “but I can’t disobey my husband.”

“I can’t leave without you saying yes,” the interpreter pleaded. “Will you breakfast with us tomorrow instead?”

“Okay,” said Graham, “but it has to be a short meeting as we’re leaving for Kashan.”

“I know,” said the interpreter, reminding us that the secret police were aware of our every move. “See you at 9am. Good night.”

A close encounter at the airport

Graham’s third encounter involved nothing more than being offered – and declining – an invitation to attend an all-expenses-paid conference. We hoped that would be the last we saw of the secret police, but at the airport there was a final surprise.

“That’s fine by me. All of this is really starting to… freak me out!” I blurted out.

“I’d hug you too, good mother, but it is haram. Forbidden.”

As I removed my headscarf on the plane home I felt an enormous sense of relief that we’d survived our trip unscathed. In January 2020, Iran shot down Ukraine Airlines Flight 752 shortly after it took off, killing all 176 on board.

We’d been on Flight 752 from Tehran to Kiev only eight months before.

The 6 EU special territories to have on your travel radar

Seven of the weirdest museums in the world you can visit

Holiday homes from hell: Is it worth buying property abroad?

What is horinca? Learning to make the drink that doubles up as money.

Here are the latest COVID-19 travel restrictions in Europe

Red, amber or green? UK fleshes out its traffic light rules for travel